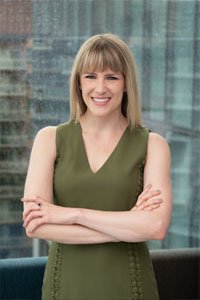 Betsy was a member of the trial team that secured a complete defense verdict in a multi-state consumer fraud class action involving Bayer’s One A Day multivitamins.  Her practice includes Indian law, consumer class action, and criminal cases, at both the trial and appellate level.

Betsy has a deep commitment to pro bono work, especially in the areas of criminal defense, post-conviction litigation, and the rights of incarcerated people.  During law school, she represented indigent clients in Georgetown’s Criminal Defense and Prisoner Advocacy Clinic, for which she earned the International Academy of Trial Lawyers’ Award for Outstanding Clinic Student, and interned at the Public Defender Service for the District of Columbia and the Bronx Defenders.  At Wilkinson Stekloff, Betsy spearheaded the firm’s juvenile resentencing practice, first-chairing and then supervising cases brought under DC’s Incarceration Reduction Amendment Act (“IRAA”), which allows individuals to seek resentencing for serious crimes committed when they were children.  She recently led a team that secured a landmark class action settlement requiring Missouri and its private medical contractor to provide Hepatitis C treatment to individuals incarcerated in the Missouri Department of Corrections.

Betsy is on the Board of the Second Look Project, an organization dedicated to advocacy and legal support for individuals given extreme sentences when they were young. She is a volunteer Big Sister with Big Brothers Big Sisters of the National Capital Area.