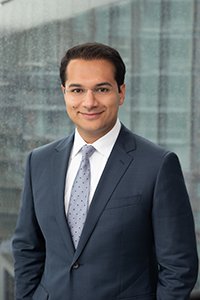 Chanakya Sethi is an Associate at Wilkinson Stekloff. He has represented corporate and individual clients in a broad range of high-stakes matters, including antitrust and consumer class actions, federal criminal cases, and government investigations. Since joining the firm in 2018, Chan has helped lead the team that tried a four-month jury trial involving a federal racketeering prosecution and was on the team that tried antitrust claims before the Federal Trade Commission involving a $12.8-billion investment. He was also a member of the team that successfully represented a federal district judge in mandamus proceedings concerning the prosecution of former White House national security advisor Michael Flynn.

Chan has an active pro bono practice, with an emphasis on the rights of LGBT individuals, criminal defendants, immigrants, and people living with disabilities. Most recently, he argued and won a case in the Ninth Circuit holding that non-citizens facing deportation in reasonable fear proceedings have a right to counsel. And in recent years, he has led multiple amicus briefs for the National Association of Criminal Defense Lawyers, the National Association of Federal Defenders, and the National Association of Disability Representatives before the U.S. Supreme Court. He has also represented the United Nations High Commissioner for Refugees, Amnesty International, and Human Rights Watch in various federal courts.

In recognition of his trial and appellate successes and pro bono efforts, Chan was named to the Best LBGTQ+ Lawyers Under 40 List by the National LGBT Bar Association.

Before joining the firm, Chan practiced at Williams & Connolly LLP.

Chan is a trustee of The Daily Princetonian, the independent student newspaper of Princeton University, and a director of the Princeton University Summer Journalism Program, which brings 40 students from low-income backgrounds to Princeton’s campus for an intensive 10-day seminar on journalism and college preparation.