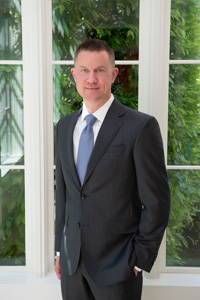 Clayton Wiggins is an Associate at Wilkinson Stekloff.  Before joining the firm, Clayton served as a prosecutor and appellate counsel in the United States Marine Corps.

As a prosecutor, Clayton tried four contested criminal cases before juries and was lead counsel on ten felony-level guilty pleas. As an appellate counsel, Clayton briefed and argued multiple cases before the Navy-Marine Corps Court of Criminal Appeals and the Court of Appeals for the Armed Forces.  He was named the Department of the Navy’s Military Justice Officer of the Year for 2021.

During law school, Clayton interned at the International Criminal Court with the defense team for a former Vice President of Congo.  As a Student Attorney in the Appellate Litigation Clinic, Clayton secured a remand for his client in a case he briefed and argued before the United States Court of Appeals for the Sixth Circuit.

Prior to law school, Clayton deployed for seven months with the 15th Marine Expeditionary Unit in support of military exercises and contingency operations in the Middle East and Asia-Pacific.  In college, he was a member of the 2001 NCAA Division I Men’s Outdoor Track National Championship team.