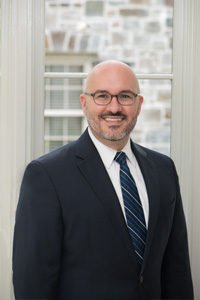 Jeremy Barber is a Partner at Wilkinson Stekloff. He is a former federal prosecutor and experienced trial attorney, having brought more than 30 cases to trial before judges and jurors.

Before joining Wilkinson Stekloff, Jeremy practiced at Paul, Weiss, Rifkind, Wharton & Garrison in New York City, where he represented both individuals and companies in matters around the country. From 2010 to 2014, Jeremy served as Senior Nominations Counsel in the Office of Legal Policy at the U.S. Department of Justice. In that role, Jeremy assisted the Administration with the nomination and confirmation of federal judges. Previously, he spent four years serving as an Assistant U.S. Attorney in the District of Columbia, where he prosecuted cases before D.C. jurors and handled cases on appeal before the D.C. Circuit and the D.C. Court of Appeals. In 2005, he clerked for the Honorable Henry H. Kennedy, Jr. of the U.S. District Court of the District of Columbia. Jeremy began his legal career as an associate at Latham & Watkins LLP. Before law school, Jeremy served as a Peace Corps volunteer in The Gambia.