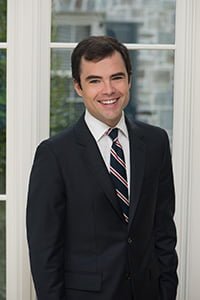 J.J. graduated from the Yale Law School, where he was an editor of the Yale Law Journal. While in law school, he received the Harlan Fiske Stone Prize (awarded to the best oral advocate in Yale’s moot-court competition) and the John Fletcher Caskey Prize (awarded to the winners of Yale’s trial-advocacy competition). He also won the 2014 National Championship at the National Trial Competition (an interscholastic mock-trial tournament hosted by the American College of Trial Lawyers) as a member of Yale’s trial-advocacy team. Before law school, he was a consultant at McKinsey & Company.