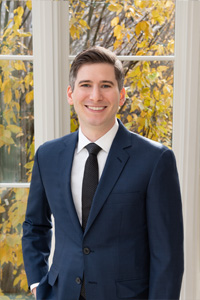 Kieran Gostin is a Partner at Wilkinson Stekloff. He has represented the government and private clients in high-profile matters for the past decade. Recently, he has represented clients in several major class actions, including obtaining a complete defense verdict in a rare trial of a major consumer class action. Prior to those representations, he spent several years representing Bayer in products liability litigation, including being a member of four trial teams that obtained defense judgments for our client.

In recognition of these successful outcomes, Kieran has received “rising star” awards from the National Law Journal, Benchmark Litigation, and Law360. Lawdragon has named him to its 500 Leading Litigators in America list.

Before joining the firm, Kieran was a trial attorney in the Federal Programs Branch of the U.S. Department of Justice, where he was the lead attorney in matters challenging the legality of executive agency action, including cases involving challenges to federal healthcare and national security programs.