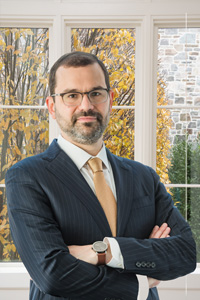 Kosta is a seasoned trial lawyer and strategist who has tried more than a dozen complex cases to verdict. As a partner with Wilkinson Stekloff, he has played a key role in many of the firm’s matters, including leading a trial team that obtained a defense jury verdict for the NCAA in a high-profile defamation case; serving as trial counsel for Facebook in a $6 billion intellectual property trial; serving as trial counsel for a former pharmaceutical executive in a nationally reported healthcare fraud trial; and defending a sitting federal judge in mandamus proceedings in the D.C. Circuit. He has also represented several Fortune 50 companies in high-stakes disputes and governmental investigations that have not become public.

Kosta has led representations in multiple substantive areas, including antitrust, contract, intellectual property, sports law, and white-collar crime. While the goal in every case is to win before or at trial, Kosta also has a record of success in post-trial proceedings, including defeating several hundred million dollars in attempted recoveries from his clients.

Before joining the firm, Kosta served as an Assistant U.S. Attorney in the Eastern District of Virginia, where he successfully prosecuted fraud, public corruption, and intellectual property crimes on a national and international level. Kosta began his legal career by clerking for the Honorable John G. Roberts, Jr. on the Supreme Court and the D.C. Circuit.

Kosta has received numerous awards in private practice, including being recognized as one of the 500 “Leading Lawyers” and “Leading Litigators” in America (Lawdragon), as a “Future Star” and member of the “40 and Under Hot List” (Benchmark), as a “Rising Star” for Trials (Law360), and as a “DC Rising Star” (National Law Journal). He previously received awards for his work as a prosecutor, including a Department of Justice Director’s Award and an Assistant Attorney General’s Award.

By appointment of Chief Justice Roberts, Kosta is one of a select group of practitioners nationwide who serve on the U.S. Judicial Conference Standing Committee on Rules of Practice and Procedure, which considers and recommends changes to the rules that govern federal litigation.