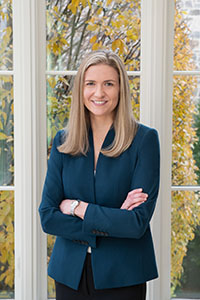 Meg graduated from Yale Law School, where she served as Executive Editor of the Articles & Essays Committee for the Yale Law Journal and as a student director for the Supreme Court Advocacy Clinic.

Before law school, Meg earned an M.Phil in International Relations at the Univeristy of Oxford as a Rhodes Scholar and rowed for St. John’s College. She received her undergraduate degree from University of California, Irvine where she served two terms as student body president and played Division I water polo.