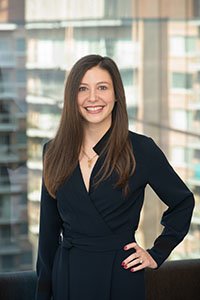 Moira Penza is a Partner at Wilkinson Stekloff.  She is an accomplished litigator who has a record of success winning high-stakes civil and criminal trials.

Since joining Wilkinson Stekloff, Moira has been a key member of some of the firm's most high profile cases.  Recently, Wilkinson Stekloff, led by Moira, was retained to serve as co-lead trial counsel for defendants Warner Chilcott and Watson (then-owned by Allergan) in a federal antitrust class action arising out of allegations of anticompetitive conduct related to Loestrin 24, a popular oral contraceptive.  The case, which involved approximately $8 billion in trebled damages, settled days before Moira was set to deliver the opening statement, for less than 5% of that amount.  Moira is also currently representing Summer Zervos in her defamation lawsuit against President Trump based on his public denials of a 2007 sexual assault.

Before joining the firm, Moira served as an Assistant United States Attorney for the Eastern District of New York, where she led numerous criminal investigations and prosecutions involving both white collar and violent crime.  Notably, Moira’s groundbreaking prosecution and trial conviction of Keith Raniere—the leader of a purported self-help group—generated worldwide media attention and has been credited with paving the way for other sex trafficking prosecutions against powerful individuals.

Before becoming a federal prosecutor, Moira practiced at Paul, Weiss, Rifkind, Wharton & Garrison, where she handled product liability, mass tort, securities, and other complex litigation matters and helped secure favorable results, including trial victories, for a broad range of clients across industries.

Throughout her career, Moira has demonstrated a commitment to public service, including maintaining a robust pro bono practice while in private practice. Moira’s pro bono work included serving as trial counsel for restaurant workers who had been sexually harassed by their former employer. Following a federal bench trial, the court awarded compensatory and punitive damages.