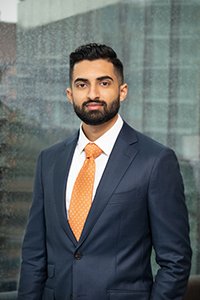 Rahul Hari is an Associate at Wilkinson Stekloff.  Before joining the firm, Rahul practiced at Sidley Austin LLP in Los Angeles, CA.

Rahul attended law school at New York University School of Law, where he served as an Administrative Board Member of the Moot Court Program and a Fellow with the Program on Corporate Compliance and Enforcement.  Rahul also served as a litigation extern in the Civil Division of the United States Attorney’s Office for the Southern District of New York and as a judicial extern for the Honorable Raymond J. Ikola, California Court of Appeal.

Rahul also maintains an active pro bono practice. In partnership with the Los Angeles Center for Law and Justice (LACLJ), Rahul has successfully represented survivors of domestic abuse in hearings and trials in L.A. Superior Court. Rahul served as lead trial counsel in a four-day trial that resulted in his client receiving primary physical and legal custody of her four minor children as well as a sizeable allocation of the marital property.

During law school, Rahul was twice invited to participate in Baylor Law School’s “Top Gun” trial competition. Sixteen of the country’s leading student advocates compete to be named the country’s best advocate. Rahul won the competition in 2015 and was named runner-up in 2016.