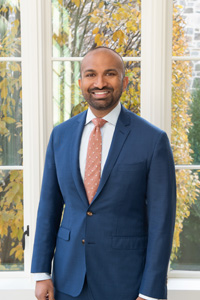 Rakesh specializes in delivering favorable results to clients at every stage of litigation.  He has helped deliver high-profile trial victories for Bayer and the NCAA, obtained major summary judgment victories for Bayer and Georgia-Pacific, secured full dismissal of a groundbreaking enforcement action by the Consumer Financial Protection Bureau before any discovery was taken, and successfully defended a sitting federal judge in mandamus proceedings in the D.C. Circuit.

Clients routinely call on Rakesh to develop winning strategies in their most significant complex litigation matters.   Since joining the firm in 2017, he has played a lead strategic role in ten different class action or mass tort cases, doing everything from arguing dispositive motions to crossing expert witnesses at trial to arguing precedent-setting appeals.

Rakesh is also an accomplished antitrust litigator.  He is currently serving as co-lead counsel for the NCAA in a putative antitrust class action lawsuit brought by current and former student-athletes under the Sherman Act challenging NCAA rules that prohibit or limit them from receiving compensation for the commercial use of their name, image, and likeness (NIL). He represents the NFL in a putative class action lawsuit challenging the NFL’s multibillion-dollar exclusive distributorship arrangement with DIRECTV for Sunday Ticket. Rakesh is counsel for Altria in antitrust litigation involving its minority investment in e-cigarette maker JUUL Labs.  And he has played a leading advisory role regarding potential antitrust issues in several confidential merger matters

In recognition of his diverse practice, Rakesh has been recognized as a Rising Star for Sports and Betting by Law360, and as one of Bloomberg Law’s 40 Under 40.  Benchmark Litigation has identified Rakesh as a “Future Star” and selected him to its 40 and Under Hotlist three years in a row. He also appeared on Lawdragon’s “500 Leading Lawyers in America” list for 2022.

Before joining the firm, Rakesh was a Special Assistant to the President and Associate Counsel in the Office of White House Counsel, where he provided legal advice and strategic counseling to the Obama Administration on its domestic policy agenda. He also helped to develop and implement the government’s litigation strategy in cases arising under the Affordable Care Act and the Fair Labor Standards Act.  He is regularly consulted and quoted by the media as an expert on executive branch legal issues.

Rakesh began his career clerking for Justice Elena Kagan on the U.S. Supreme Court and Judge J. Harvie Wilkinson III on the U.S. Court of Appeals for the Fourth Circuit.

Rakesh is also active in the legal community.  He sits on the Board of the Legal Aid Society for the District of Columbia, and is an editor of the Green Bag and a member of The American Lawyer’s Young Lawyer Editorial Board.  He also serves on the Nominations Committee of the Asian Pacific American Bar Association-DC, and previously served as a Director of APABA-DC’s Education Fund.