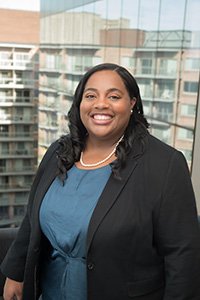 Samiyyah Ali is an Associate at Wilkinson Stekloff. She has represented clients in a variety of practice areas, including antitrust, products liability, white collar criminal defense, and defamation.   Samiyyah also maintains an active pro bono practice and has experience representing clients in trial, appellate, and post-conviction proceedings.  In 2020, Samiyyah secured early release of one of her pro bono clients, who was sentenced to life in prison for a crime he committed as a teenager and who has spent over 25 years in prison reshaping his life.

Samiyyah graduated from Vanderbilt University Law School, where she served as the Executive Editor of the Vanderbilt Law Review.  While in law school, Samiyyah received the Bennett Douglas Bell Memorial Prize for excellence in academics and character, as well as the Myron Penn Laughlin Note Award for her writing on the intersection of patent and administrative law.