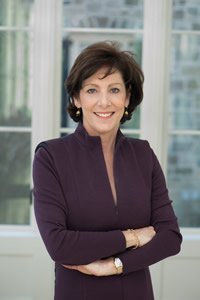 Beth has been lead counsel in over 50 jury trials, including numerous bet-the-company, multibillion-dollar cases. Over almost 30 years, she has developed an unrivaled record of victories in both federal and state courts throughout the country. Her career has taken Beth from the Army to a leading role in the prosecution of the Oklahoma City bombers to nationally recognized work as a litigation partner at two of the nation’s most prominent law firms, and most recently to founding Wilkinson Stekloff.

Beth is a Fellow of the American College of Trial Lawyers, a member of American Law Institute (ALI), and a Legal 500 Leading Trial Lawyer. She has been named a Litigator of the Year by The American Lawyer, a Law360 Trial Ace and Trial MVP, and a National Law Journal Winning Litigator. Beth also serves on the board of directors of the Washington Lawyer’s Committee for Civil Rights and Urban Affairs.

In addition, Chambers and Partners has repeatedly named Beth a national Star Trial Lawyer and recently honored her “Outstanding Contribution to the Legal Profession.” Chambers described Beth as “smart and strategically brilliant — a phenomenal trial lawyer” who is recognized by her clients and colleagues as a “real powerhouse, a trial guru.” Others call her “the best litigator in the DC market, period” and “a go-to person for any trial you could have.”

Before entering private practice, Beth served as an Assistant U.S. Attorney in the Eastern District of New York, counsel to the Deputy Attorney General, and Principal Deputy of the Terrorism and Violent Crime Section. In 1995, the Attorney General selected Beth as one of the prosecutors for U.S. v. McVeigh & Nichols. Beth was the only two-time recipient of the Department of Justice’s highest award.

Prior to her work for the Department of Justice, Beth was a captain in the U.S. Army and served as an assistant to the General Counsel of the Army for Intelligence & Special Operations. At the end of her time in the military, Beth was appointed as a Special Assistant U.S. Attorney in the Southern District of Florida to assist with the prosecution of U. S. v. Manuel Noriega.

Throughout her career, Beth has done pro bono work, served on boards and taught trial advocacy. Beth currently serves on the board of directors of Onex, a publicly-owned private equity company. She previously served on the board of Equal Justice Works and was the co-chairman of the Constitution Project’s Death Penalty Initiative. Beth has testified in front of both the House of Representatives and the U.S. Senate on death penalty issues.